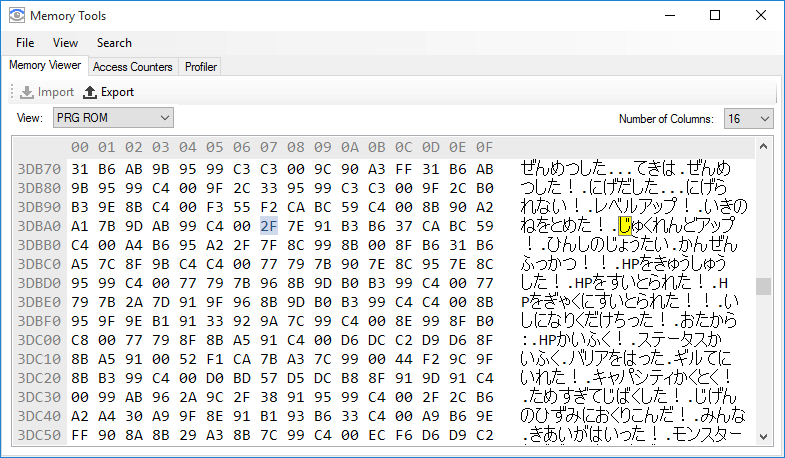 The memory viewer offers read and write access to all types of ROM and RAM:

Note: Only memory types that are available for the currently loaded ROM will be shown in the dropdown.

PRG ROM and CHR ROM are writable from the memory viewer. Any change will remain in effect until a power cycle. If you want to save your PRG/CHR ROM modifications to a .nes file, or as an IPS patch, you can use the File→Save or File→Save edits as IPS commands in the debugger window.

There are a number of highlighting/coloring options in the memory viewer.

View→Memory Access Highlighting has coloring options for addresses that were recently read, written or executed (colored in blue, red and green, respectively). A fade-out period can also be configured, after which the byte will revert to its normal black color.

View→Data Type Highlighting offers options to change the background color of specific bytes based on their type:

The Ignore writes that do not alter data option prevents CPU writes from being highlighted when the value being written matches the one already present in memory.

Note: It is possible to customize the colors used by the memory viewer in View→Configure Colors

There are 2 ways to edit memory values:

For most types of memory, it is possible to export its contents to a binary file as well as import it back from a file. Use the Import and Export commands to do this.

Using the right-click menu, you can Freeze values in CPU Memory. Frozen addresses are shown in magenta.
Frozen addresses will no longer be affected by write operations - effectively making those addresses read-only for the CPU. It is still possible to manually edit the value of frozen addresses using the memory viewer.

TBL files are text files that define mappings between sequences of bytes and text characters. For example, it might define the byte $95 as the character ‘A’.

When active, the debugger keeps track of all CPU and PPU memory reads, writes and executions. It is possible to view these counters here.

Use the Sort By option to sort the list based on different criteria.

The Reset button allows you to reset all counters back to 0 – this is useful when you are trying to gather data for a specific portion of the execution.