There is no installer for Mesen-S – run the Mesen-S.exe application and a first-run configuration wizard will be shown.

Data Storage Location: This section of the wizard allows you to select where you prefer to keep the emulator’s files.

Create a shortcut on my desktop: Check this option if you want to add a Mesen-S shortcut to your desktop.

The default configuration should work out of the box and allow you to get right into playing games.

To load a game, use the File→Open command and select any supported file (or drag and drop a file):

Additionally, .zip and .7z archives containing ROMs can be loaded directly.
Once a game is loaded, you can pause, reset or stop the game via the Game menu.

Alongside Super Game Boy support, Mesen-S can also emulate regular Game Boy and Game Boy Color games, without running them through the Super Game Boy. To control which Game Boy model is used when loading .gb and .gbc files, use the Model dropdown in the Game Boy options.

SPC files are used to store music from SNES games. These can be loaded like any other type of ROM.

When loading SPC files, the UI will display information about the track, artist, etc. while the track is playing. 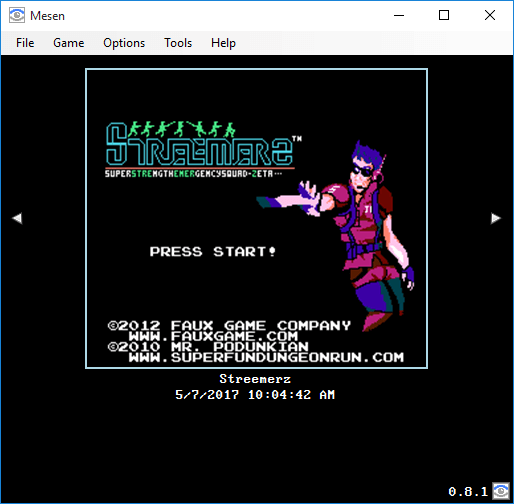